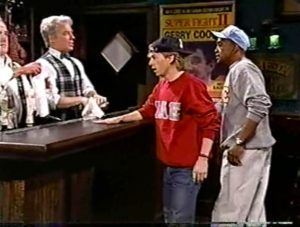 A 1995 sketch called “O’Callahan & Son Pub” on an episode hosted by Paul Reiser was completely plagiarized from a standup routine by Rick Shapiro. SNL Writer Jay Mohr first denied knowing about Shapiro’s act but later admitted in his memoir that he listed the sketch word for word from Shapiro. Shapiro sued the show and gained a settlement that was undisclosed.