Sheever is a DoTA Queen – Biography

If you are a DoTA 2 game lover and have been watching Shanghai Major, for a while, you probably were searching the web to track down the Most Beautiful (sexy) DOTA 2 host ever. Wearing a gracious glittering blue gown, she resembled a Disney princess, and her pure white skin was radiating an ‘aura’. Like all dutch girls, she is very tall, fair and athletic built. Yes, we are talking about – Sheever  (Jorien “Sheever” van der Heijden), one of

the most popular and appreciated female presences in the Dota 2 scene. Sheever is a caster, streamer, host and interviewer for all things Dota 2 related. You should have seen what a big ‘HUSH’ was about her whenever she spoke. Wearing a gracious glittering blue gown, she resembled a disney princess, and her pure white skin was radiating an ‘aura’. Like all dutch girls, she is very tall and athletic built.

Who is this Sensational Blonde Beauty ?

She goes by name of Sheever and was born in the beautiful land of tulips and windmills, the Netherlands. We all saw her hosting the Shanghai Major DoTA 2 tournament 2016 being held in China, but she has a interesting background in gaming too.

She has recently been diagnosed with Breast Cancer. She has attended various chemo sessions, and looks very positive.

Sheever has casted and hosted numerous major Dota 2 tournaments, such as The International and Starladder Starseries. Besides her utmost passion for video games, Sheever is a movie enthusiast and a big cat lover. Her cat, Diego, is making frequent appearances on stream. Most recently, she has acted as full time host for Dream League Season 3.

Jorien “Sheever” van der Heijden, one of Dota 2‘s most prominent casters and streaming personalities, revealed earlier today on her Twitch channel that she has cancer and will start undergoing treatment for it later this week.

Wow. The amount of support that I am getting from everyone is overwhelming. Thank you <3

She added that she’ll be heading to the hospital with her brother and undergoing Cold Cap treatment to try and prevent the loss of hair that can result from chemo therapy.

Originally from the Netherlands, Sheever began her casting career with GosuGamers in 2012 before moving on to work independently as an analyst and caster for some of the game’s biggest events, including Starladder, Valve-sponsored Majors, and The Internationals. As a result of her treatment, Sheever said she would miss the Manilla Masters tournament later this month as well as the next few weeks of DreamLeague.

She played various games while she was young but never did spend that much of her free time on them. Until one of her sisters got the game Warcraft III (later also the Frozen Throne expansion) and after playing the campaign they discovered the world of Battle.net.

They started playing a lot of tower defense, and later also a lot of DotA, until World of Warcraft came out.  It took her 2 years to reach hardcore raiding but ended up doing so for 4 years, of which 3,5 years with the same high end raiding guild. She quit before T13 at the end of November but was still used to gaming at least 5 nights a week.

Damn Girl You Are BIG !

‘What is sheever’s height’ is a frequently asked question on the internet. We all know that she is a ‘BIG’ girl, and tall (Thanx to her dutch gene pool). Well lets ask Sheever herself , how tall is she ? 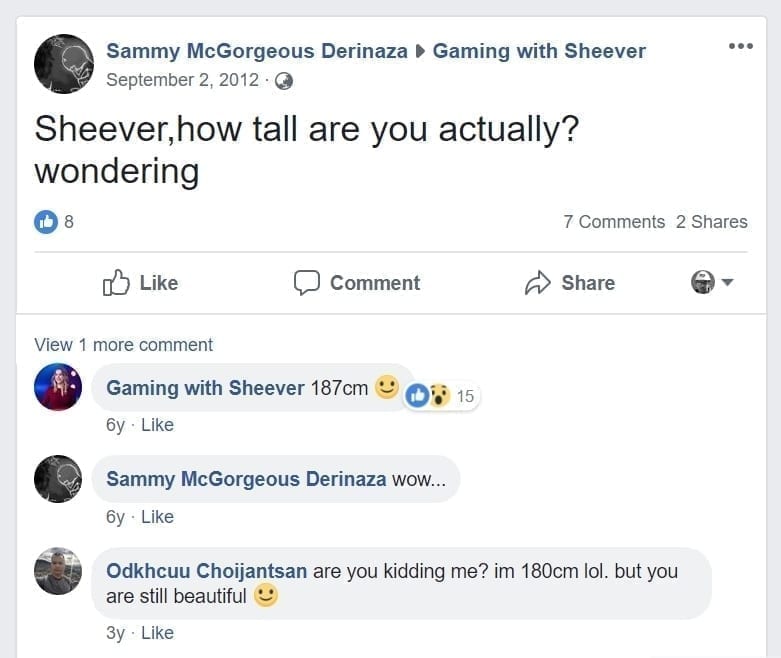 For those people, who have been asking me, how tall is sheever ?, Well sheever’s height is 187cm.

Sheever’s Sexy Feet Are More Famous Than You Think !

Ok many gamers are foot fetishers too. In the DoTA community sheever’s feet are a Gold Standard. We tried to bring together all the media showing her beautiful feet and long toes. You might also be interested to see some more beautiful female on TWITCH