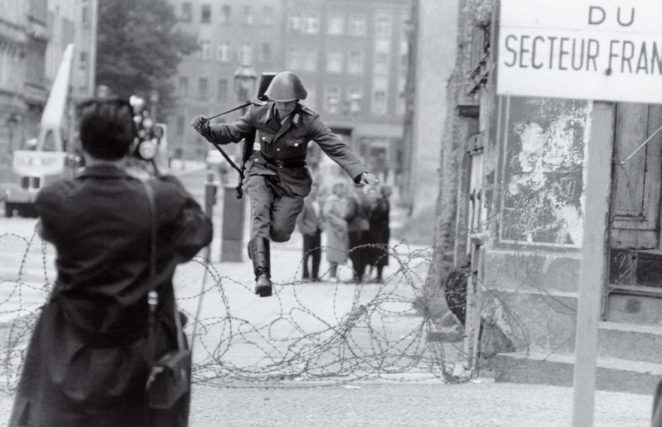 Following World War II, the conquering Allied governments carved Berlin into four occupation zones. Yet each part was not equal, and from 1949 to 1961 some 2.5 million East Germans fled the Soviet section in search of freedom. To stop the flow, East German leader Walter Ulbricht had a barbed-wire-and-cinder-block barrier thrown up in early August 1961. A few days later, Associated Press photographer Peter ­Leibing was tipped off that a defection might happen. He and other cameramen gathered and watched as a West Berlin crowd enticed 19-year-old border guard Hans Conrad Schumann, yelling to him, “Come on over!” Schumann, who later said he did not want to “live enclosed,” suddenly ran for the barricade.

As he cleared the sharp wires he dropped his rifle and was whisked away. Sent out across the AP wire, Leibing’s photo ran on front pages across the world. It made Schumann, reportedly the first known East German soldier to flee, into a poster child for those yearning to be free, while lending urgency to East Germany’s push for a more permanent Berlin Wall. Schumann was sadly haunted by the weight of it all. While he quietly lived in the West, he could not grapple with his unintended stature as a symbol of freedom, and he committed suicide in 1998.