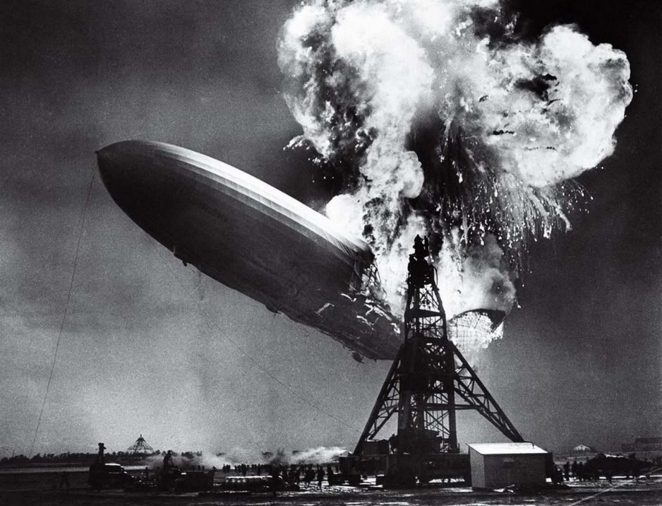 Full story on this article. Zeppelins were majestic skyliners, luxurious behemoths that signified wealth and power. The arrival of these ships was news, which is why Sam Shere of the International News Photos service was waiting in the rain at the Lakehurst, N.J., Naval Air Station on May 6, 1937, for the 804-foot-long LZ 129 Hindenburg to drift in from Frankfurt. Suddenly, as the assembled media watched, the grand ship’s flammable hydrogen caught fire, causing it to spectacularly burst into bright yellow flames and kill 36 people. Shere was one of nearly two dozen still and newsreel photographers who scrambled to document the fast-moving tragedy. But it is his image, with its stark immediacy and horrible grandeur, that has endured as the most famous—owing to its publication on front pages around the world and in LIFE and, more than three decades later, its use on the cover of the first Led Zeppelin album.

The crash helped bring the age of the airships to a close, and Shere’s powerful photograph of one of the world’s most formative early air disasters persists as a cautionary reminder of how human fallibility can lead to death and destruction. Almost as famous as Shere’s photo is the anguished voice of Chicago radio announcer Herbert Morrison, who cried as he watched people tumbling through the air, “It is bursting into flames… This is terrible. This is one of the worst catastrophes in the world … Oh, the humanity!”