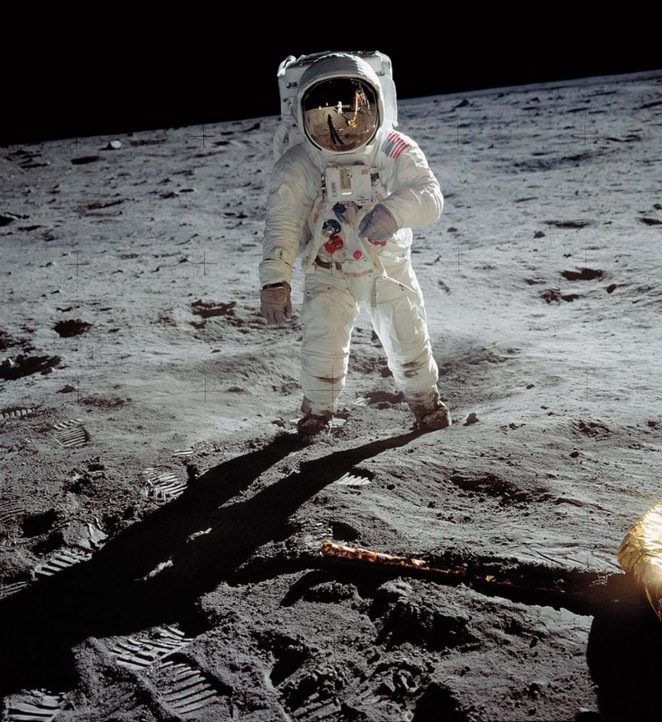 Somewhere in the Sea of Tranquillity, the little depression in which Buzz Aldrin stood on the evening of July 20, 1969, is still there—one of billions of pits and craters and pockmarks on the moon’s ancient surface. But it may not be the astronaut’s most indelible mark. Aldrin never cared for being the second man on the moon—to come so far and miss the epochal first-man designation Neil Armstrong earned by a mere matter of inches and minutes. But Aldrin earned a different kind of immortality. Since it was Armstrong who was carrying the crew’s 70-millimeter Hasselblad, he took all of the pictures—meaning the only moon man earthlings would see clearly would be the one who took the second steps.

That this image endured the way it has was not likely. It has none of the action of the shots of Aldrin climbing down the ladder of the lunar module, none of the patriotic resonance of his saluting the American flag. He’s just standing in place, a small, fragile man on a distant world—a world that would be happy to kill him if he removed so much as a single article of his exceedingly complex clothing. His arm is bent awkwardly—perhaps, he has speculated, because he was glancing at the checklist on his wrist. And Armstrong, looking even smaller and more spectral, is reflected in his visor. It’s a picture that in some ways did everything wrong if it was striving for heroism. As a result, it did everything right.