Sridevi was born on August 13, 1963 in her father’s hometown of Sivakasi, Tamil Nadu, India. Her mother was from Tirupati, Andhra Pradesh. So Sridevi grew up speaking Telugu and Tamil. She has a sister named Srilatha and a stepbrother named Satish. Her dad passed away during the year 1991, while her mom died during 1997. 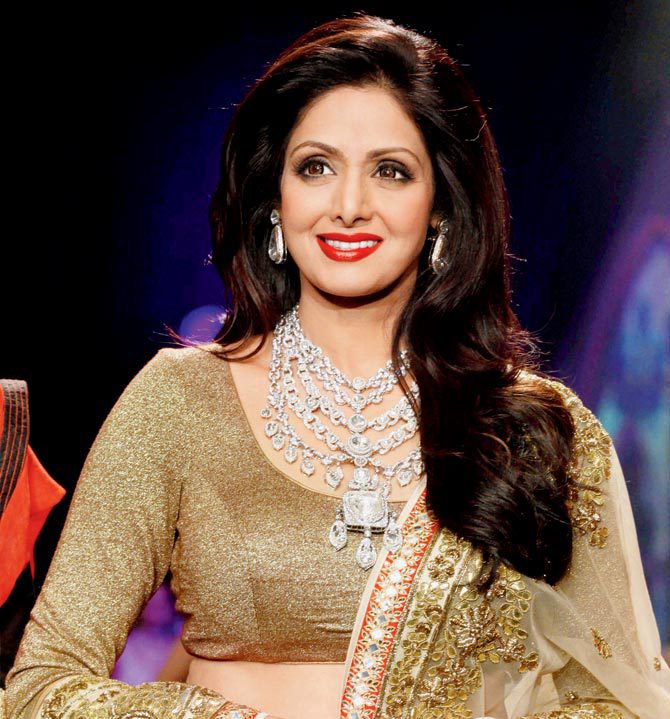 She started her career at a very early age in 1967 as a child artiste in a Tamil movie ‘Kandhan Karunai’. She also starred as a child actress in a Telugu movie ‘Bangarakka’ in 1977, and in a Malyalam movie ‘Kumara Sambhavan’ in 1969. She is ranked #4 Most Beautiful Bollywood Actresses

She made her foray on the Bollywood tinsel screen in 1975 as a child actor with the smash-hit ‘Julie’ in which she played the younger sister of the lead actress. Thereafter she started to act in adult roles in Hindi only from 1979. She appeared in 63 movies in Hindi; 62 in Telugu; 58 in Tamil; and 21 in Malyalam – in a career that has spanned from 1967 through to 2007.

Sridevi was and remains on of the biggest superstars that the country has ever seen. Her poise, talent, that smile and the elegance with which she conducted her five decade long career made Sridevi one of the most cherished stars in India. Sridevi has got several accolades to her name and as we remember the beautiful lady on what would have been her 56th birthday, we take a walk down memory lane with some of her best Filmfare Awards moments. A woman of few words, Sridevi spoke with her acting.

She gave the cinema fanatics films like Chaalbaaz, Mr. India, Nagina, Lamhe, English Vinglish and her last film Mom. We would not dare venture in her unprecedented filmography from the South cinema where she started out at the tender age of five. Sridevi was a force to reckon with and the way she revolutionised the status of the heroine in Indian cinema remains of utmost relevance even today. A mindful actor, a dance of her own league and woman of substance, we remember the glorious days of the first ever female superstar, Sridevi with some of her best Filmfare Awards speeches.

She has also appeared in the TV series ‘Malini Iyer’, judged a TV show ‘Kaboom’ as well as appeared in numerous print and TV ads. She is also on the Board of Directors of the Asian Academy of Film & Television.

Sridevi went on to get married to her co-star, Anil Kapoor’s older brother, Boney, on June 2, 1996. They are now parents of two daughters: Jhanvi and Khushi.

She made a comeback to films with “English Vinglish” in 2012.

She passed away on 24 February 2018 by accidental drowning in bathtub during her stay at the hotel Jumeirah Emirates Towers, Dubai UAE, when she was attending the wedding of Bollywood actor Mohit Marwah in Dubai, UAE. She was 54 years old.