Madhuri Dixit is one of the most acclaimed actors and Kathak dancers Bollywood have ever witnessed. Born in a Marathi Brahmin Koknastha family to Mr. Shankar and Mrs. Snehlata, Madhuri Dixit has two sisters Rupa, Bharti, and brother Ajit. 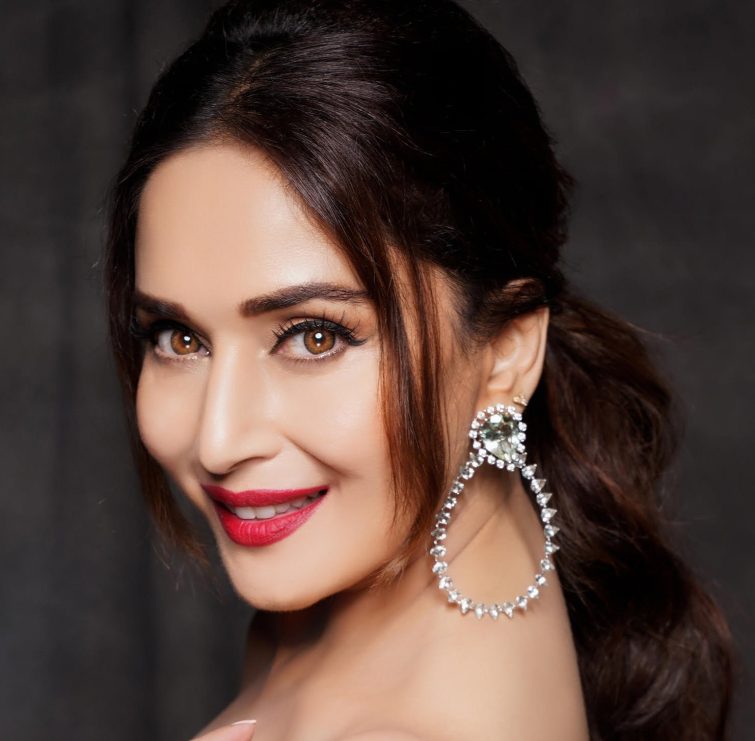 She performed decently well in her academics and aspired to become a Microbiologist which made her pursue the subject from Mumbai’s Sathaye College, formerly known as Parle College; but within six months she opted out from college to pursue her career in Bollywood. Though she debuted with ‘Abodh’ in 1984, it’s with ‘Tezaab’ (1988), a romantic thriller caste opposite Anil Kapoor, where she started garnering fame and popularity. She earned her first nomination of Filmfare Best Actress with this movie and it was also the highest grossing film in that year. Her performance in ‘Ek Do Tin’ made every heart groove to the beats of the song. During this time, Madhuri also got featured on Debonair and she was also featured as the cover girl on 1986 Filmfare edition. Since then she has graced more than 72 movies with her stupendous performances.

In 1993, Dixit starred in the super-hit film ‘Khalnayak; opposite Sanjay Dutt and Jackie Shroff. Her portrayal of the police officer Ganga earned her critical acclaim and a sixth nomination for the Filmfare Best Actress Award and became the year’s second highest grossing film. In 1994, Dixit starred in ‘Anjaam’, being paired with Shahrukh Khan for the first time. Dixit’s performance of a revenge-seeking wife and mother earned her a seventh nomination for the Filmfare Best Actress Award. She was praised for her performance, even though the film was an average performer at the box office. Her next was ‘Hum Aapke Hain Koun’ opposite Salman Khan. The film became one of the biggest hits & the highest grossing Bollywood film after its theatrical run and held this record for 7 years till the release of ‘Gadar: Ek Prem Katha’ (2001). Madhuri was awarded her third Filmfare Best Actress Award for the film. 1995 witnessed Dixit star in the hit film ‘Raja’ opposite Sanjay Kapoor. The film became the fourth highest grosser of the year and its success was attributed to her immense popularity. Her next release was David Dhawan’s ‘Yaraana’ opposite Rishi Kapoor, in which she played a dancer on the run from her abusive lover. Both films earned her nominations for the Filmfare Best Actress Award.

In 2006, Dixit returned to India with her family and acted in Anil Mehta’s dance film ‘Aaja Nachle’ (2007). It was her first release in five years and her performance was appreciated by critics and also earned her the nomination for the Filmfare Best Actress Award. She is ranked #5 Most Beautiful Bollywood Actresses

In 2008, she was also awarded the prestigious ‘Bharat Ratna’ for her contribution to Indian cinema by the Government of India. In 2011, Dixit was felicitated with the Filmfare Special Award for completing 25 years in the film industry.

In 2012, she was seen in the comedy ‘Dedh Ishqiya’ (2014), a sequel to Ishqiya (2010) opposite Naseeruddin Shah, Arshad Warsi, and Huma Qureshi. The film opened to a positive response from critics who called it “one of the year’s most important releases”. The film also earned her the fourteenth nomination for Filmfare Award for Best Actress. Her next release of the year was the debuted director Soumik Sen’s ‘Gulaab Gang’ alongside Juhi Chawla.

Madhuri Dixit made her debut in Marathi cinema both as an actor & Producer in 2018. She played the lead in ‘Bucket List’ and produced “15th August” which is slated for a Netflix worldwide released in 2019. She has also lent her voice for the Netflix original ‘Mowgli’.

In (2019) she was seen reunited with Anil Kapoor after 17 years on screen in a comedy, action and adventure movie ‘Total Dhamaal’ the third sequel of ‘Dhamaal’ (2007). In the same year, she also a part of Dharma productions ‘Kalank’ a period drama film directed by Abhishekh Varman starring along with Sanjay Dutt, Varun Dhawan, Aditya Roy Kapur, Alia Bhatt, and Sonakshi Sinha.

Madhuri Dixit is also associated with various philanthropic activities. She is associated with UNICEF since 2014 to advocate the rights of children, prevent child labor and child trafficking. She was appointed as the brand ambassador for the Beti Bachao Beti Padhao campaign by the Government of India in 2015 that aspires to create awareness and upgrade the efficiency of welfare services intended for girls.