Hema was born in the Tamil-speaking Chakravarthy household on October 16, 1948 in Ammankudi, Tamil Nadu. Her dad’s name is V.S.R. Chakravarthy and her mom, Jaya, was a film producer. She was enrolled in the Chennai-based Andhra Mahila Sabha. 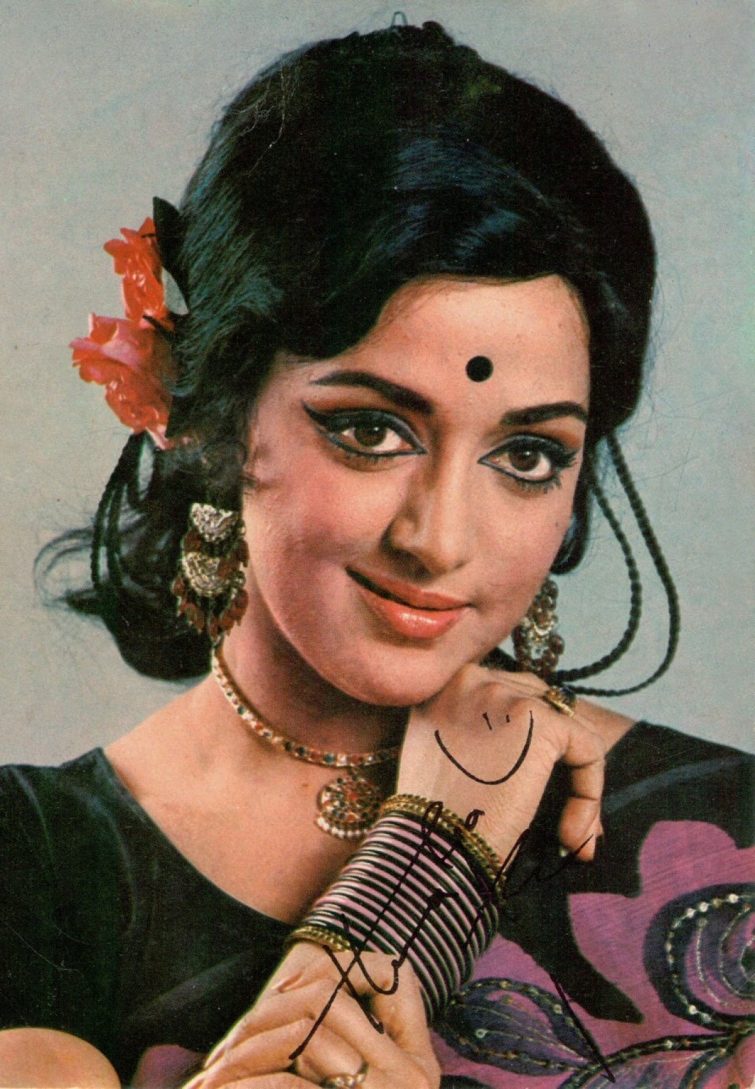 After performing as a dancer in a 1961 regional movie, she was rejected by Tamil Director, C.V.Sridhar, during 1964 when she first attempted to act, on the grounds that she was too thin to be heroine in Venniradai and the role went to Venniradai Nirmala. Later Hema performed in the song Singara Therukku Selai sung by Seergazhi Govindrajan and L.R.Eshwari as a supporting actor from the 1963 Tamil film Idhu Sathiyam starring S.A.Asokan as the hero. But Hema persisted, debuted opposite Raj Kapoor in ‘Sapnon Ka Saudagar’ just 4 years after her rejection but the movie was a flop.

Thereafter there has no been looking back for this attractive Libran, who went to star in close to 155 movies; who also produced and directed two movies, and also directed a TV serial ‘Noopur’.

After turning down marriage proposals from Sanjeev Kumar and Jeetendra, she met with hot fellow actor, Dharmendra, both were attracted to each other and wanted to get married. Dharmendra, who was already married to Prakash Kaur, and had two sons, Sunny and Bobby, could not marry Hema as Prakash refused to divorce him. According to the Hindu Marriage Act, a Hindu cannot marry a second time while the first wife is still alive. Dharmendra belongs to a Arya Samaj Hindu Punjabi Jatt family.

She had a hit on-screen pairing with Dharmendra, Shashi Kapoor and Dev Anand in the 70’s and, post-marriage, she had 8 hits opposite Rajesh Khanna in 1980-87. Dharmendra Hema Malini were paired in lead roles romantically in 31 films but have worked in 35 films. Of them 20 were hits and 15 were flops. Interestingly Rajesh Khanna-Hema Malini pair had 2 hits in early 70’s and then 3 unfortunate flops in late 70’s after which pair was written off but in eighties they gave 8 blockbusters as a pair. In all Hema has 10 hits with Rajesh Khanna. She was regarded as the Sex Symbol of Bollywood for years.

On August 21, 1979, both Hema and Dharmendra converted to Islam, changed their names to Aisha Bi R. Chakravarty and Dilawar Khan Kewal Krishn respectively, and got married in accordance with Islamic rites. Three years after their marriage, Hema subsequently gave birth to Esha and then later to Ahana. Esha is an actress in her own rights. The trio, well proficient in the arts of Bharatnatyam dance form, have performed together at a number of dance events and concerts.

She was amongst the first actresses to wear bell-bottom and shirts in Hindi movies, and is also amongst the few who have kept their word of not wearing any revealing outfits in public. Hema, who is also called ‘Dream Girl’ continues to act in movies as of 2013.